Your Pond in Summer 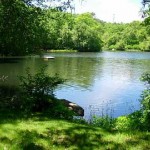 Your Pond in Summer

At long last it’s warm enough to sit outside and enjoy watching the wildlife your pond has attracted.  You just need to keep on top of things.  Trim off any dead leaves or flowers surrounding your pond before they fall to the bottom and turn into smelly, black sludge.

Feeding your fish in summer

We all have a tendency to overfeed our fish, so just give them as much as they can eat in a maximum of 5 minutes (experts say 2-3 minutes and not at all in a heat wave). Fish excrete ammonia which is detrimental to ponds because it encourages algae, blanket weed and duckweed. The more you feed them the more they excrete and the bigger your problems become.  An indication of over feeding is when an oily film appears on the surface of the pond. 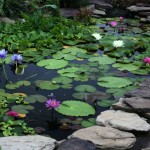 Strong summer sunlight can quickly turn pond water green.  This is caused by single celled algae, so try to introduce as much shade as possible.  Water lilies are good, because they not only give shade and shelter for fish, but also look pretty and use up nutrients leaving less for the algae to feed off.

Trees are good for shade but have the disadvantage of leaves falling into the water which is not good as they’ll rot away and feed algae, however, they can be netted off before this happens.

As a last resort, if we have a particularly hot day, you could always position a garden umbrella or parasol during the hottest part of the day.

Oxygenating weed is a vital part of your pond, but at this time of year it can become invasive.  Normally if you pull it out it just breaks off which stimulates rapid re-growth, a bit like pruning back in the garden.  However, if you pull it out after Aquaplancton has been in your pond, you’ll make a much better job of controlling it, because the Aquaplancton will have loosened its grip by eating away the mud foundation that it’s rooted into.  This way, the whole root system will come away which goes a long way in helping to control the weed.

Oxygen Levels  While we’re on the subject of oxygen, it’s important to know that as temperatures rise and the water warms up, it is less able to hold dissolved oxygen.  Fish are cold blooded creatures, so therefore use more oxygen as the temperature rises and their metabolic rate increases. Golden Orfe need more oxygen than most and the larger the fish the more oxygen it requires, making large fish the most vulnerable.

So, how do we get oxygen into our ponds? 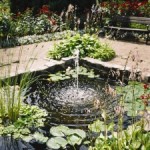 By aeration – rapid movement from a waterfall or fountain.  On hot humid nights it’s best to leave fountains and waterfalls switched on.  Alternatively, if you prefer more peace and quiet, an air pump or air stones will keep oxygen levels up and noise levels down.

If more oxygen is consumed than is produced then aquatic life will either move away to a better pond or become weak and die. Hot weather is particularly bad for fish, because the oxygen rich water near the surface of the pond is too warm, but the cooler water at the bottom of your pond has too little oxygen.  This is because the process of rotting organic matter such as leaves, dead plants and fish excrement rapidly depletes the water of oxygen, which is why it is important to reverse this process by using Aquaplancton which knocks out the bad oxygen using anaerobic bacteria and replaces it with the beneficial oxygen making aerobic bacteria raising oxygen levels by an average of 20%.  Aquaplancton also works well in conjunction with biological filters as it enhances the biological action whereas chemicals will destroy the beneficial bacteria. Ultra Violet filters help some pond owners because they kill algae, but they can also kill the beneficial life within your pond so they are not always the answer.

Evaporation due to sun and wind can be a problem because, if water levels drop too much there is no alternative but to top-up.  Tap water has high levels of phosphates and other trace elements which foster the growth of algae, so it is important to treat the tap water before topping up.  Any Aquatic Centre will sell you what is required for this.

Rain water is better than tap water, however, all rain water is acid to a certain extent, so sprinkle a little Aquaplancton in afterwards to neutralise any acidity.  Any milkiness will disappear when the Aquaplancton settles.

As a general rule, the less you do manually to a pond the better.  So, try to sit back, enjoy the fruits of your labour and let nature take its course.

This entry was posted in Ponds through the seasons, Tips and tagged Aquatic plants, Oxygenating weed, Pond, Water lilies. Bookmark the permalink.